Batman, Superman, Daredevil, Wonder Woman, Batgirl, Oracle, Spidey…. I love them all. I love the Avengers. I love supes, and comics. Here’s what I don’t love: the way that comics and superhero movies treat disability.

Spoiler Warning for Guardians of the Galaxy, Batman Movies etc.

On Saturday night my husband and I went and saw Guardians of the Galaxy. The movie is delightful. It’s fun, goofy and also super violent. A good balance for a superheroes movie.

Rocket Raccoon, the tiny gun-toting escaped lab experiment who enjoys creating property damage might be one of my favorite characters in the movie. He’s snarky, he’s ridiculous, and he’s kind of jerk. In all but two cases his jerkiness is hilarious and acceptable.

See, Rocket makes fun of the disabled. But it’s not just that he makes of them, it’s that he literally sees them for spare parts. Rocket asks Peter to get a prosthetic leg for him during a major escape scene. Turns out that Rocket didn’t NEED the leg. He just wanted to know how the amputee looked hopping around. He makes the same joke later about taking a one-eyed man’s eye for a plan. It’s not like either of these things has ever happened to anyone, right? Oh wait. I get almost weekly reports about wheelchairs being stolen. I’ve had my cane snatched out of my hand or off of a table in order to be played with or inspected. It’s not funny.

Some days I wonder if I take things like this too personally, but honestly, in a world where Hawkeye was once Deaf but is now hearing, in a culture where Oracle has been returned to her walking self and is again Batgirl, in a film industry where Iron Man’s enemy has an army of disabled people who want him to fix them…. I’m not sure I AM taking this too far. The dialogue around cures, for example, is a huge debate in real life. Many people with disabilities (including myself) have no interest in searching for a cure. Either the options are too far afield for the medical community, or we just don’t think we’d adjust to a new life adequately. But in Iron Man 3, hundreds of disabled people are willing to throw their lot in with an evil genius because he can fix them. I don’t know many people who would chuck their morals for a new eye or a leg.

Culturally speaking, disability is a punchline in comics. Or it’s the end result of something awful, such as in the Killing Joke. This results in a devaluation of disabled lives, and the place that we have in society. In fact, it totally erases the idea that people with disabilities can be superheroes, or even be normal people.

Which is weird. Because in terms of social interactions in the Real World I get called a superhero all the time just for living – and that bothers me a lot. If I were a superhero I could fly, or be invisible, or, I don’t know…. BE A RACCOON AND SHOOT THINGS WITH A GIANT GUN. It would be nice to see some acknowledgement that we exist. Instead, disability is discarded the moment that it can be cured in a comic or superhero movie – the option of a disabled superhero who can be both just doesn’t get used.

In an example of where a comic book gets it really right, I recently saw a panel of a Daredevil comic in which he is sitting on the subway, he has a white cane and he is holding it in the same way that I do when I am on the subway. In Matt Fraction’s Hawkeye the Deafness is still kept within the character, and in a recent issue speech bubbles were empty until the characters around Hawkeye began using sign language. 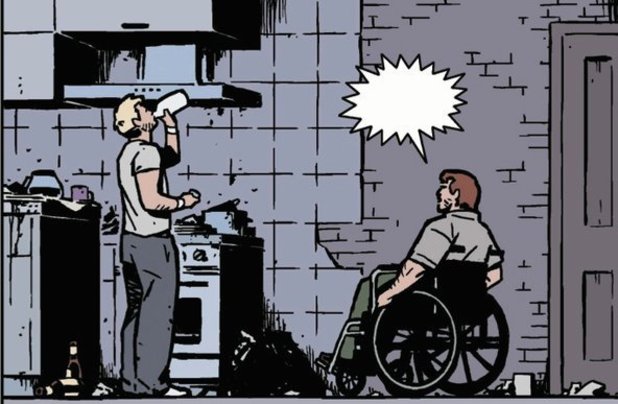 These examples are certainly positive, but surrounded by all the negatives it isn’t enough.

Another depiction of blindness appears in the Fantastic Four: Rise of the Silver Surfer. The Thing’s girlfriend is blind. Because obviously no one but a blind woman would be able to stand dating him. Oh, and she didn’t use a cane, she just stood around and “acted” blind. Representation in film is in some ways more important than in the comic books because many of us with visual impairments cannot read comic books – but we do see movies.  This is important to me because I’m tired of seeing my community used as a plot point. I’m sick of being spare parts for Rocket Raccoon.

I don’t think that the disabled are above comedy, but I think writers need to be more cautious about the jokes that are made. We’re people, but right now, that’s not the way that these movies and comics treat us. Our histories are erased from comics to make characters able-bodied,

our representations are momentary cameos for comedic relief, or made for dramatic effect as the enemy. If we’re neither of those, then you’re either Professor X or Nick Fury.

Both of whom are men, and for both of whom their disabilities don’t seem to effect them too terribly much in the eyes of able bodied viewers.

Some diversity would be absolutely lovely. Until we can have respect for more than two characters with disabilities, let’s lay off the jokes, not just because it makes me wish I didn’t love comics and comic book movies, but because it seems to encourage people to make up their own jokes about how funny it is to take away assistive tech from cripples.