The Burlesque Hall of Fame Weekender is an event attended by hundreds of burlesque performers, producers, photographers and fans from all over the globe. It is held in Las Vegas, NV in a casino populated by the typical denizens of a casino except for at this one specific time. That is when the Glitter Tribe arrives to take over the casino floor and four nights of shows flood the stage.
The first Weekender that I attended I was asked to keep myself safe because it was Las Vegas, and there were lots of drunk people, and I would be there by myself. I thought that was a silly thing to ask, given that my mother was someone everyone knew, and that I couldn’t possibly get into trouble surrounded by all of our people – even if they were drunk.

Four years later I want to revisit that thought.

There is a dress in my closet. It is a red iridescent slinky dress. It’s vaguely reminiscent of the 1950s, and makes me look like Joan Holloway from Mad Men. I love this dress.
This year while packing, I had to make the choice to leave that dress at home – because every year that I’ve worn this dress to BHOF I have experienced sexual harassment. 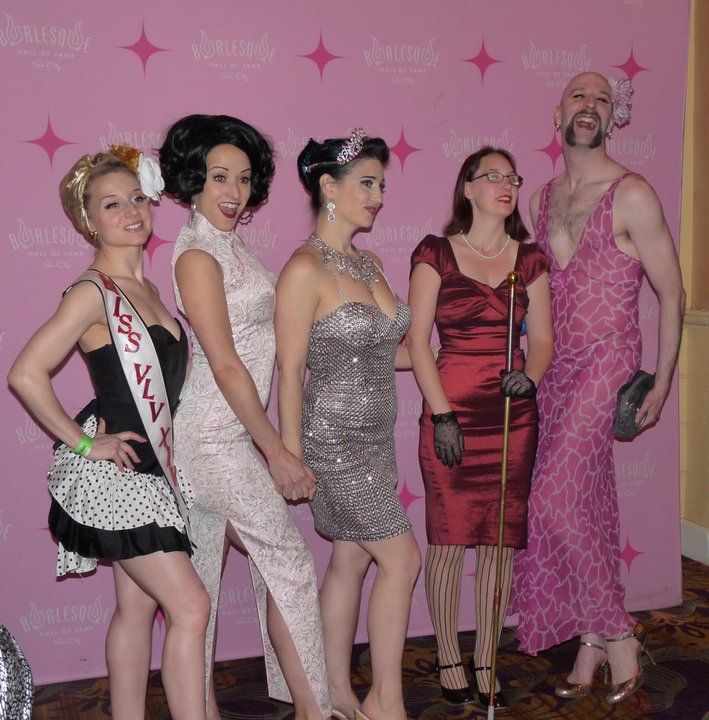 The photo above is The Red Dress on the night when a member of our community had to get security because a man was following me around the dance floor after I asked him to leave me alone, and got in my face when I told him I wasn’t interested. Security arrived and he was 86ed from the event.

I experienced physical assault this year – and I didn’t do anything about it in this instance because I could never recognize the man who did it. He grabbed me multiple times on the upper arm, bruising me once – he told me that we knew each other and that he “loved” me, but never gave me his name. I was not safe. In this instance I should have found someone in charge who DID know who he was, but I was too distracted.

For him – the rules seem clear to me. 1) Physical touch should never be painful. 2) We’ve got a really big group of people, and no one should be expected to recognize everyone – give your name even if you THINK they should know you!

Burlesque is about being sexy. Burlesque is about empowering ourselves in our bodies.
We need to learn how to make sexy safe, and the movement starts at home. It starts with members of our community discussing how to make our physical affections acceptable for people who aren’t as cuddly. It starts with asking before grabbing someone’s boob, or asking if it’s OK to hump them on the dance floor (if you’ve never met) – if you have met them before, making sure that you know what is and isn’t ok is a part of friendship.

I think one of the ways in which we can combat the lack of safe feelings is by combating the urge to live in the 1950s. Many of us wear fashions reflecting the Golden Age of burlesque – many performers are using the art form to recreate the burlesque of the old days – but that doesn’t mean we should be behaving as if it is still 1955 We have to remember that we’re in the era of third wave feminism – and that no one owns a woman’s body but the woman who inhabits it. (Or man, for that matter!) Furthermore, if someone DOES feel unsafe, we shouldn’t be jumping to the “Well, look at what you’re wearing” argument against them. If someone in the burlesque community feels uncomfortable or fears for their safety DO SOMETHING. Don’t be afraid to stand up for the people around you.

The Weekender is about celebrating our community WITH our community – we should not be forced to make choices about our clothing based on safety. Most of us bare it all in front of strangers, so within our community space it should be OK to wear whatever we want. This should be a safe space, not an unsafe space. I want to be able to wear my red dress and not worry about people in my space making me not want to wear it again.

These problems aren’t just at the Weekender, as a note, these problems exist throughout all burlesque events and all communities.

So let’s talk about creating a culture in which we don’t have to fear.
Let’s make sexy safe.

Leave a Reply to Axy Click here to cancel reply.