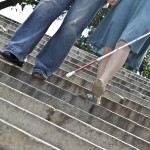 Ten years ago I attended a study abroad program for teenagers at Oxford University. Ten years ago I got my first white cane. I decided after much thought that it didn’t seem to be such a smart idea to go by myself to a foreign country without some kind of adaptive aid, and while I had never seen myself as… END_OF_DOCUMENT_TOKEN_TO_BE_REPLACED

“PSA: OCD stands for “obsessive-compulsive disorder.” It is not an adjective. You’re not “a little OCD” because you just picked a cat hair off your shirt or arrange your dvds alphabetically. You may think that’s cute or harmless, but it’s actually condescending to and dismissive of people like me who legitimately fight every day to function without being crippled by… END_OF_DOCUMENT_TOKEN_TO_BE_REPLACED

My dear friend Lillian asked me to do an interview for her blog, in a series called “Devil In the Details”. I write about my experiences with sight, and how I live my day to day. It can be seen here! If you have any more questions you’d like me to answers, leave ’em in the comments and if I… END_OF_DOCUMENT_TOKEN_TO_BE_REPLACED

A few weeks ago, with my husband, I was at the Avengers. During the previews, an ad for a new television show on the Sundance Channel appeared and sure enough, the moment it came on the screen I knew I was going to have issues. Push Girls is a television series about 4 women in wheelchairs who live in Los… END_OF_DOCUMENT_TOKEN_TO_BE_REPLACED

Hello!   Many of you will  be coming to this blog as a friend of mine, so you already know all this, BUT – I’m Elsa. I am blind. I am married. I am a historian. I am the daughter of a burlesque performer. I am proudly disabled. I am a practicing Druid. I am a feminist. I am a… END_OF_DOCUMENT_TOKEN_TO_BE_REPLACED