This post will contain spoliers for Mad Max Fury Road and a spoiler for Game of Thrones’ episode “Unbowed. Unbent. Unbroken.”

So I haven’t watched Game of Thrones yet. I know that Sansa Stark, who replaced Jeyne Poole as Ramsay Bolton’s rape interest, is married off and is raped. And I don’t want to watch that scene because it will wash away the utter glee that I’m currently experiencing as a result of seeing Mad Max: Fury Road. 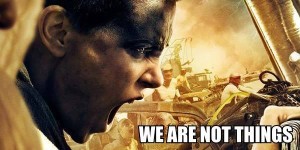 There’s a lot of good about Mad Max Fury Road, so let me get the bad out of the way: It is an overwhelmingly white cast.

Which sucks because PoC should be part of the post apocalyptic landscape as much as white people and disabled people are.

And I don’t want to dismiss that this is a serious problem with action movies. If you’re not Samuel L. Jackson, you’re not alive in a post apocalyptic setting according to the action movie world.

But this aside, this movie made me so happy I actually cried.

During an action movie. Yeah.

So let’s start at the beginning with the most obvious reason why the MRA’s are so upset about this movie: the titular character Mad Max is not the *main* character. He is support. He is barely scripted. In fact, he is referred to as a “blood bag” and chained up for the first quarter of the movie. You want to talk about fridging characters? Here we are.

And it’s fantastic. The lead character, the character whom we all look at as the hero of this film, is Imperator Furiosa. Who happens to only have one arm. The other is a prosthetic made up of various metal ingredients including a wrench.

And I didnt notice that she was a cripple like me until fifteen minutes into the movie, and at that moment I realized that a prayer I’ve been whispering into the ether of culture had come true. A disabled action heroine. I officially loved the movie – but I needed to see this character do something that no able bodied actor portraying a disabled character has done recently: I needed her to stay disabled.

In Glee, Artie gets up out of his chair and dances. In Theory of Everything we see a dream sequence where Eddie Redmayne gets out of the chair. Our consumption of media concerning disability always has to remind us that it’s okay – they aren’t really disabled.

But in Mad Max: Fury Road no such reminder exists. We are never expected as an audience to suspend the belief of her disability – and there is no pity that we are meant to feel, no shame that she feels for her disability. She is never anything but a competent badass. With a prosthetic hand.

There is no discussion of how she lost her limb, no stupid questions about how she gets things done – no questions about whether or not she has sex, whether she is pretty, whether she is loved. I guess that’s the beauty of an action movie that is also a feminist film – there’s no bloody time to ask questions like that because the war rig needs to keep moving.

And I haven’t had it until now.

The film isnt just awesome because of Furiosa herself, but of the journey that she is taking with the other women whom she is fleeing with. When Furiosa shouts “We are not things” I felt like cheering, because the statement is one that we are still needing to chant in this time long before the end of the world.

When Furiosa hears that her homeland is gone, that the hope she had for a green place is lost… when she drops her prosthetic arm on the ground and keens with sadness and with hopelessness – that moment made me cry. Because yes, there is a time when we want to just drop our adaptive devices, when we are so angry that we just need to stop and rage.

The movie is a fantastic one because it doesn’t set out to prove anything. It isn’t a movie made to prove a point, it’s a movie made to tell a story, and that story proves a point without needing to. This movie takes on sexual slavery in the apocalypse without ever having a fully naked woman, without ever raping anyone, without ever showing any sexual content at all. This film is about standing up to exploitation, not about exploiting exploitation for entertainment. Unlike certain television shows I may have mentioned earlier in this piece. Every single woman in this film has a pesonality. Every single character in this film has values, some we may not agree with, but they are still values. And those values come through.

This film, whether or not you realize it, is about women’s freedom to own their bodies. It is about a disabled woman being equal to her peers. It is, despite the title, not about Mad Max.

The MRA’s *should* be afraid of this movie. Not because it’s going to ruin their precious action genre – that isn’t going to radically change anytime soon.

No, the MRA’s should be afraid because Imperator Furiosa is a beacon of light. She is a character we can point to. We can aspire to feel her rage, to be as badass as she when it comes to doing something about the hurt. We can survive. We are not things.

And holy damn but did I love that movie. A+ would watch again.

Fully actualized female characters. Grandmothers with shotguns. Matriarchies strong together. A disabled heroine whose disability is neither an inspiration nor something to overcome.

I hate to tell you, but Mad Max? Might be my favorite movie of the year. Top that and I will make you cookies.