In graduate school I studied the history of obscenity in the United States, and specifically sought to understand art as a subject for legal critique. My question has always been why art is so threatening to society. Every year, the American Library Association presents one week (the first week of October) as Banned Books Week. One week to educate the public on the history and issues surrounding banned books. So I’m doing my part here at feminist sonar.

Book burning and book banning are both manifestations of the desire to control information. Historically speaking, those who seek to control the kind of information which is deemed inappropriate are socially conservative and religiously conservative groups, trying to keep a hold on the rampant devastation of “good” society.

Stepping into my handy wayback machine, let’s take a look at some of the first people who banned books in the United states: Anthony Comstock and the New York Society For the Suppression Of Vice. 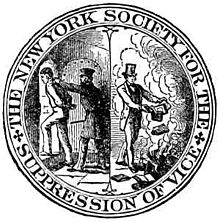 You’ll notice that even in their group seal, they have a man burning books. Comstock was the reason for the federal Comstock Law, which is how many books on the classically banned books list at the ALA landed on the list. The Comstock Law federally criminalized sending obscene materials through the mail providing groups a solid foothold for the legal battle against smut and literature.

These days, books are banned for a myriad of reasons. But I find most of them rather baffling. Scanning the list of banned books over the last 5 years, I can see that not only have I read most of them, but frequently the banning just doesn’t make sense. However, the point is not the baffling nature of the reasons for banning a book, but the very idea that a book should be banned in the first place. For example, I understand why the Catholic Church had issues with Philip Pullman’s His Dark Materials series. I don’t agree with their issues, and had I been in a city where the book had been banned, you can be sure I would have been upset. The books aren’t just about religion, but are an excellent story about growing up.

It is the books banned for having homosexuality which I find the most troubling.

The reason I find it troubling is that I feel that most of these books are banned out of fear. Out of fear that children will learn that being gay, or a person of color, of being from a different religious background, or for that matter that having sex is okay. People ban books and burn books as a signal for fear of knowledge. Fearing that someone might live a life differently.  That their lifestyle is a threat. Stories can teach us many things, but one of the most important things that literature can teach us, is tolerance. We can get inside someones head, and learn their life, we can explore their trials and their successes. And we can do it all without having to intrude.

And when it comes to books like The Hunger Games we fear the idea that what happens inside a book is going to happen outside of the book. But I don’t think reading a book is going to make me *want* to go hunt my peers in a dangerous arena. Quite the opposite. But what the Hunger Games might teach a young woman is how to fight for her freedoms. Branded as anti-family, I felt that the book taught us that our family is what we make of it. Protecting our little sisters from going to a terrible place, creating relationships with others in communities – these are not anti-family actions, but rather ones of communal spirit.

And as for the “unsuited to age group” notice that lands on almost every challenged book – we don’t pick the ages when we’re ready to read the books we want to. It isn’t up to groups to decide what someone is ready to learn. I read Sherlock Holmes when I was 6 and it didn’t turn me into a pipe smoking, cocaine using sociopath. It turned me into a person who likes to observe the world, and who would be proud to have a book banned – because it would mean I made people think.

Perhaps, rather than fearing the written word, we should embrace the challenges it gives us. So read a banned book today, and question why it was banned. You might learn something about the society you live in.